The purpose of this study was to investigate the regional boarding secondary school students’ attitudes towards mathematics according to some variables. This research was conducted with survey method. The sample of study was consisted of 322 regional boarding secondary school students from Göksun district of Kahramanmaraş province in Turkey. The sample consisted of 167 male and 155 female students; 80 of them were fifth grade, 77 of them were sixth grade, 80 of them were seventh grade and 85 of them were eighth grade students. Data were collected with a “Personal Information Form” developed by the researchers and “Mathematics Attitude Scale” developed by Önal (2013). The SPSS 17.0 statistical software was used to analyze the data, using the independent samples t-test, one-way analysis of variance (ANOVA) and Pearson correlation tests depending on the variables. As a result of the study, the students’ attitudes towards mathematics were positive in general and there was no statistically significant difference with respect to gender. On the other hand, it was determined that there was a significant difference the students’ mathematics attitudes according to mathematics achievement, class level, liking level of math teacher, perception importance of mathematics and perception of mathematical self-efficacy. 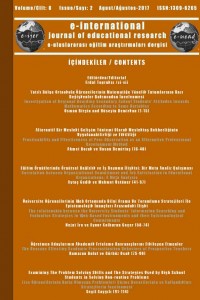