An Analysis on the Reasons for Unionization of Educators

The aim of this study is to examine the reasons of unionization of educators. For this purpose, convergent parallel design among mixed-method design where qualitative and quantitative methods were used together was preferred. The study group of the quantitative dimension consists of 270 educators (teachers and school administrators) working at different levels of schools under Kilis Provincial Directorate of National Education. As a result of the analysis conducted on the data obtained from the participants, it has been observed that the willingness of educators to meet their financial and social expectations was the first reason for a union organization. It was followed by fulfilling the professional and personal development needs and emotional reasons. In addition, it was noted that the reasons for unionization of educators differed according to the variables of their professional position and membership of the union and that they did not differ according to the variables of gender, seniority and school ranking. For the qualitative dimension of the study, when the data obtained from the study group which was formed by using the maximum variation sampling method, were analyzed by using descriptive and content analysis methods. It was observed that the opinions of educators were mainly under three themes. It has been found that such views as protecting and improving the rights of educators, organizing activities to regulate professional development and representing the worldview are prominent for educators in terms of becoming members of unions under the theme of why educators become members of unions. Opinions such as the political and ideological structure of unions, the failure to fully protect the rights of employees and the fear of being labeled were highly emphasized under the theme of why educators do not become members of unions. It has been seen that the opinions such as unions should stay away from politics, they should ensure unity and solidarity among education workers and protect and improve the rights of employees are mostly expressed under the theme of how an ideal education union should be. 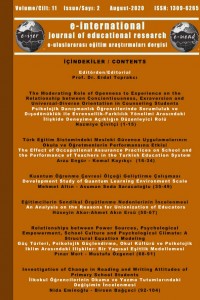