Purpose: This study searches the obedience level and also reasons of primary school teacher's behaviors to the ethical principles which are set forth in “Regulations about The Public Servants Ethical Behavior Principles and its Application Rulesâ€? Method: Survey method was used in this study, carried out in two phases using both qualitative and quantitative data collection instruments. In the first phase, the articles of relevant Regulation were converted into a survey having 18 items with 5 choices each. The survey was considered as being valid since it was converted from a legal document. Cronbach Alpha reliability coefficient was found as 0,89. Obedience levels of teacher's behaviors to the ethical principles set forth in the regulation were analyzed in terms of different variables. Data was analyzed using t-test and one way Analysis of variance (ANOVA) tests. In the second step qualitative data were collected through open-ended questions to explore the reasons why the interviewees gave those answers. Qualitative data was analyzed using content analysis. The research group of this study is 301 teachers who work in the schools of Sivas, urban area. Findings: The most general striking finding of the study is that teacher behaviors have been found at obedient “very muchâ€? level. Regarding this result, it is possible to claim that teacher behaviors are not obedient to the public work ethic principles at an expected level. On the other hand, the appropriateness of teacher's behaviors to the ethical item “as far as I have seen so far, teachers inform the officials concerning the violations and irregularities of other teachers related with their profession and teaching processâ€? was found as “mediumâ€? level; yet to the other items founds as “muchâ€? level. According to the one way variance analysis results, in the appropriateness of teacher behaviors to the ethical principles, meaningful differences were found at (p<0,05) level between the teachers having longer period of work experience and different socio-economic level variables. Data collected via qualitative means showed that different answers were given for the obedience reasons of each ethical principle. Results and Suggestions: Implications of this study indicate that teachers do not obey any ethical principles at “very muchâ€? level. It was also found out that they obeyed at “mediumâ€? level to the principle of informing the officials concerning the violations and irregularities; this was proven with the data gained through qualitative means, as well. Bearing in mind that it is impossible to designate a supervisor for each teacher, it is the responsibility of every teacher to conduct a kind of peer supervision to some extend. If not, this may lead a damage of public interest. Another remarkable result is that the aspects of theacher behaviours in accordance with convenience level of ethical principles have been increasing parallel to the experience of occupation. In other words, experienced teachers think much more positively than novice teachers that ethical principles are obeyed by theachers. This can be explained with professional socialization. Interviewees gave quite striking answers to the question of “what is the basis of ethicsâ€? and striking findings were found about it. A meaningful difference was found between the teachers who judge the “regionâ€? as the only basis of ethics and others. Another finding about this is the thoughts of teachers related to the obedience of others who judge the basis of ethics as “lawsâ€? are accepted at the highest level to the ethical principles. This also supports the findings that the reasons to obey the ethical principles are seen as legal obligation. It has suggested that a new "Certificate of Teaching Profession Code of Ethics," what is needed. national and international quality and regulatory.In this way, It has been thought to be compensating for a very important deficiency.related to the teaching profession that main editor of all the professions. Keywords: Ethichs, Ethichs in education, Teacher's ethics, Professional ethichs. 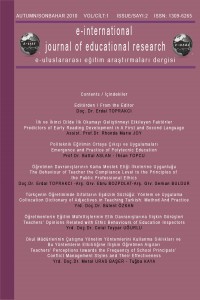