The Perceptions of the School Administrators about Procrastination, Personality Traits and Workloads

This research is purposed to determine the school administrators perceptions about their procrastination behavior, workload, and personality traits by quantitative research techniques in the sample of 270 school administrators (77 principals and 193 vice-principals) working in the primary and high schools located in central district of Malatya province. For the quantitative research, ‘survey model’ was used. The data of the research were collected with ‘Procrastination Scale for School Administrators’, developed by the researcher, ‘Role-Oriented Workload Scale’ and ‘Big Five Factor Personality Scale’ scales. The variables of gender, subject, duty, school type, were also examined in the relation between procrastination behavior, workload, and personality traits. 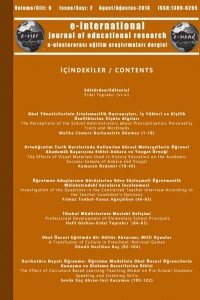