Problem and Purpose: PISA, which are implemented in many countries, identify strengths and weaknesses of education systems of such countries and pave the way for developing future-oriented policies for education systems. For this reason, PISA results need to be able to enlighten differences among individuals and include minimum error. In other terms, reliability and validity evidences regarding measuring results must be presented. One important threat against validity is item and test bias (Clauser and Mazor, 1998). The individuals at the same level of ability are normally expected to get the same score from the test or items in a test. However, probability of correct answers in subgroups of the same ability level might differ due to conditions of the test or some attributes of the item. This is called differential item functioning (DIF) (Zumbo, 2007; Finch and French, 2007). DIF refers to systematic differentiation of individuals in a group with the same test score and ability level in terms of probability of answering a certain test item (Doğan, Guerrero and Tatsuoka, 2005). Regarding items of attitude, Hulin, Drasgow and Parsons (1983) define DIF as differing probability of showing positive attitude towards a certain item by individuals in different subgroups with the same ability level (cited by Johanson and Dodeen, 2003). In attitude scales, existence of DIF affects accuracy of measuring results in a negative way. The study aims at identify whether or not items in PISA 2012 maths work ethics questionnaire differ by gender was examined with polySIBTEST, MTK-OO and OLR methods. Also it was investigated whether items showing DIF change depending on methods. 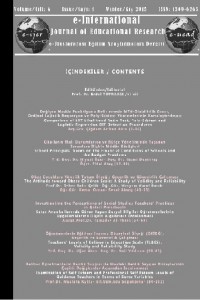