In this study, it is aimed to examine the effect of using game-based teaching method on inequalities in middle school 8th grade mathematics lesson on academic achievement and attitude towards mathematics lesson. As the research method, a quasi-experimental design with pre-test post-test control group was used. In the 2019-2020 academic year, 44 students at the 8th grade of secondary school studying in a state school participated in the research. An achievement test on inequalities was developed to evaluate academic achievement and the reliability coefficient of the test was calculated as 0.85. "Attitude Scale Towards Mathematics" developed by Önal (2013) was used to evaluate students' attitudes. Descriptive statistics, T test and Mann Whitney U test were used in the analysis of the data. In the findings of the study, it was seen that there was no significant difference between the pre-test achievement scores of the experimental group and the control group students. It was observed that there was a statistically significant difference between the post-test achievement scores in favor of the experimental group In the analysis of the scores obtained from the pre-application and post-application of the attitude scale, it was determined that there was no significant difference between the experimental group and the control group. According to the findings, it was concluded that game-based teaching method has a statistically significant and effect on academic achievement, but not a significant effect on attitude towards mathematics lesson. For this reason, it is recommended to increase researches on game-based teaching method. 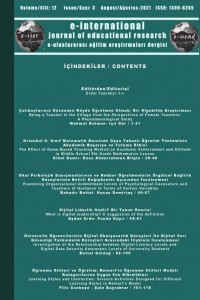