Views of Teachers about Gifted Curriculum (Case of BİLSEM)

Problem and Purpose: Recently, taking some basic conditions of our country into consideration, such as the present economic, social, cultural and educational facilities, models that are applied in different countries were examined for the purpose of reaching a greater number of gifted children, practicability of these models in our country was discussed, the large-scaled national and international studies being performed on this subject were reviewed and a new model was developed. This model that is called Science and Art Center (BİLSEM) is an educational establishment, which was opened for the purpose of enabling the gifted students that attend preschool, elementary and secondary education institutions to be aware of their personal talents, develop their capacities and use them ultimately, in such a way not to prevent their education in formal training institutions. A curriculum aimed at gifted individuals is applied in BİLSEMs and this program is approached within the scope of the instructions of Science and Art Centers. However, the fact that there is not a regulation regarding this subject yet and there is not a program in centers just like in the formal education makes the necessity of determining the opinions aimed at the curriculum for gifted individuals that is performed in BİLSEMs and given place only in the context of a regulation a current issue. At this point; assignment of teachers rendering service in BİLSEMs during the practice stages of programmes makes their opinions about the curriculum aimed at the gifted students important. It makes it so important that the determination of the satisfaction of teachers with the program and the difficulties encountered during the practice could be enabled by receiving the opinions of teachers. Considering these opinions, the manifestation of the teachers opinions regarding the curriculum of the gifted students was perceived as a problem. This study was performed in an attempt to determine the opinions of teachers rendering service in BİLSEMs, regarding the curriculum of the gifted students. Method and Materials: Survey method was used in this descriptive study. The population is consisted of 675 techers rendering service in 61 Science and Art Centers in Turkey, during the school year of 2010-2011. The sample of the study, on the other hand, is consisted of teachers rendering service in 24 Science and Art Centers, which were randomly selected from 61 Science and Art Centers in Turkey. In the study, a survey, which is consisted of items regarding the personal information of teachers, their opinions about the curriculum of the gifted students and the problems they encounter, prepared by the researcher and tested in terms of validity-reliability, was used as the data collection tool. Although this data collection tool was sent to the whole sample, only 318 of the teachers participated in the study. The techniques of frequency, percentage, arithmetic mean and the variance analysis, t-test, Kruskall Wallis-H (KWH), Mann Whitney U (MWU) and scheffe tests were used for the analyses of the data. Results: As a result of the analyses, it was revealed that the teachers opinions regarding the curriculum of the gifted students performed in BİLSEMs were positive, in general. It was determined that teachers generally agree with the opinions regarding curriculum of the gifted students performed in BİLSEMs. According to the study findings; it was revealed that teachers considerably agree with the opinion that the education provided in BİLSEMs enables students to be aware of their own personal talents. Examining the findings regarding the problems encountered by teachers in the education of the gifted students, it was determined that majority of teachers encounter with problems regarding the physical medium conditions of BİLSEMs. Besides, it was also determined that problems encountered by the majority of teachers are also related with absence of students. In addition to these, it was also concluded that teachers experience the minimum problem regarding the communication with students in the education of the gifted students. In line with these conclusions, the curriculum performed in BİLSEMs shall be improved by taking the personal requirements of students into consideration and both the physical medium and equipment adequateness of BİLSEMs shall be revised. According to these results the physical environments of Art and Science Centers, competencies of tools should be revised. In addition, the legal arrangements should be done to increase relay more time and continuity of the students in the Science and Art Centers.

Giftedness, Education of the Gifted Students, Science and Art Centers 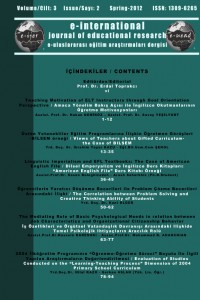