THE STUDY OF FINANCIAL STRUCTURE OF TURKISH HIGHER EDUCATION SYSTEM

Who will meet the financing of education cost, or in other words sponsorship to education, has traditionally been a social concern as in other teaching steps. Actually, this discussion is closely related to inner and outer obstacles and financial matters as well as required qualifications and efficiency of education. As the scope of the finance in education is the state, the scope of the finance in higher education is the state itself because higher education has been, so far, heavily considered as a public service whose expenses are extensively met through public sources in each country except the USA and several other countries. However, the financing of the cost of the increasing demand to higher education only with social sources is nowadays being interrogated Higher education is a service of high cost. Financing ways of higher education in various countries range a large spectrum from institutions sponsored only by students' contribution fees without any other supports else for institutions whose all higher educational expenses, including feeding and accommodation, are completely met through social sources. Financing of Turkish Higher Education service is mostly handled two different models: the state and foundation universities. The first one, state's universities, have traditionally adopted “a financial system relying on national sourcesâ€? while foundation ones have developed their own “exclusive financingâ€?. Today, budget financing accounts for nearly %80 of the budget allocated for state's universities. In the year 1973, the classical budge system was replaced by “program budget systemâ€?, and then in 1998 was converted into a joint budget system. The current system, analytic budget systemâ€? has been in practice since 2004. However, in foundation universities, the main approach is treasure aids to make contributions to their expenses provided it remains limited with the payment in the budget Despite the increase in the number of students in Turkish Higher Education system, the portion reserved from the state's budget has declined. Therefore, decline in portion of higher education allocated in the budget has also caused our higher education institutions to make up new ways of searching for exclusive sources apart from public, one of which is to increase the fee paid by students. However, such an increase in students' education fee has brought together some discussion concerning “unequal opportunities in higher educationâ€? particularly in terms of groups of middle and lower income. “The income of the higher educationâ€? in Turkish Higher Education system is socially 8.5% and individually 16.2 %. As for the global average of the income of the higher education, it has socially been 10.8% for ages, and individually 19 %. Judging from there figures, we could conclude that the income of investments performed by higher education in Turkey falls back of the global average. Briefly, such a case has turned the efficiency of the allocated financial share for the Turkish Higher Education service into too controversial matter. 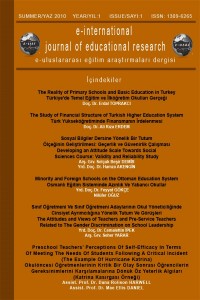