How the mental health of individuals is affected by the living conditions brought about the COVID-19 pandemic has become an important research topic. Education has been one of the most affected areas in this period, and educational activities have started to be carried out using distance education tools. In the online learning environments, students' ability to manage their behavior and take responsibility for their behavior has come to the fore in terms of protecting their mental health due to the decrease in teacher control. This study aimed to examine the mediating role of self-control in the relationship between loneliness, anxiety and mental well-being. Four hundred twenty-five university students, 304 (71.5%) females and 121 (28.5%) males participated in the study. The mean age of the participants was 21.39, the standard deviation was 2.61, and the ages ranged from 18 to 39. Research data were collected by using the Turkish version of the Warwick-Edinburgh Mental Well-Being Scale, Brief Self-Control Scale, Generalized Anxiety Disorder-7 Scale, and UCLA Loneliness Scale. In the study, descriptive statistics, reliability coefficients and correlation coefficients were calculated to examine the relationships among the variables. Two-step structural equation modeling was used to investigate the mediating role of self-control between loneliness and anxiety and mental well-being. The results of the correlation analysis showed that all the variables in the study were significantly related to each other. It was found that the data validated the measurement model tested in the first step. As a result of the structural model analysis performed in the second step, it was found that loneliness and anxiety negatively predicted self-control and mental well-being. In addition, self-control was found to mediate the relationship between loneliness, anxiety and mental well-being. Within the framework of these findings, it can be stated that loneliness and anxiety lead to a decrease in mental well-being by reducing self-control. 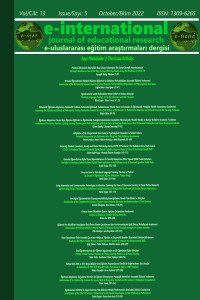