Aim: Spitefulness is defined as the determination to harm another person even if the avenging person is to pay a price. The aim of this study was to adapt the spitefulness scale developed by Marcus et al. (2014) to Turkish culture and to determine the relationship between spitefulness and demographic factors. Method: In the translation study to Turkish, the steps suggested by Brislin et al. (1973) were applied. The analyzes related to the adaptation were carried out on the data collected from a total of 501 participants, 46.3 percent of whom were females and 57.3 percent were males. This number was 398 for demographic factor analysis. In the study where aggression, selfishness, dark triad, forgiveness, self-esteem and empathy scales were used to test the fit validity, EFA, CFA and structural equation modeling were used as the analysis method. Findings: As a result of the study, it was seen that the goodness of fit index values of the Turkish version of the spitefulness scale were acceptable (RMSEA= 0.060; GFI= 0.952; AGFI= 0.928; CFI= 0.944; χ2= 2.804). It was found that the adapted scale explained 40% of the total variance, and the internal consistency coefficient was calculated as 0.857. It was concluded that the Spitefulness Scale was a tool that could give valid and reliable information with its one-dimensional structure. In the study conducted by using the adapted scale, the relationships between spitefulness and the variables of gender, age, education level and marital status were determined. Implications for Research and Practice: We hope that determining the level of spitefulness and the individual differences on this subject will provide important contributions to predict behavior in daily life and contribute to the diagnosis of personality disorders. 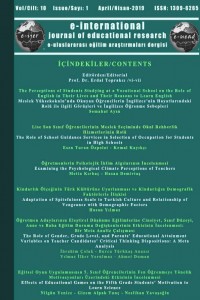